For your convenience, this post has links to Amazon.
Structural damage such as sagging, moving, and shifting floors can create numerous problems if left unchecked. A sagging floor may indicate a requirement for repair. Adding similar dimensional lumber to the sagging floor joist is one of the common ways to fix it.

This additional piece of lumber is then mechanically fastened with nails or bolts to the sagging joists. The process of replacing the old joist with a new support joist is called sistering. Structural problems will require a building professional to fix because the solution will consider the load bearing properties. Read on to learn more about how to sister a floor joist. 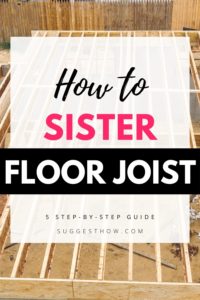 Sistering a joist should be done by a building professional because it concerns the structure and load bearing abilities of the floor. This article serves as an introduction to understand how to sister floor joists. Since every scenario is different, the fix for your home’s floor joists may come with different solutions.

Take a look at your floor or ceiling system. To reinforce damaged areas or to support extra weight of heavy items, add beams next to running joists that have weak joists.

The first step is to observe whether the area is ready to work.

You’ll need to have a licensed professional move around the wiring, pipework, HVAC, or other things that are in the way. Standard practices call for disconnecting the wires from the panel, detaching the pipes from the valves, and removing the ducting. This step is the most time-consuming.

For optimal subfloor support, tie the original joist to a sister joist with the entire length.

Tools that may be used

When installing the sister joist at the same length as the old joist, just keep it at the same size. But for cutting partial joists, follow the ⅔ rule. For instance, if the joist is 21′ long, then at least a 14′ minimum sister joist is required.

Another thing to consider is the distance on either side of the deflection point. It is the point where the floor wobbles the most. It will need at least 4′ of clearance on each side of your new joist when installing it.

Occasionally, an old joist can leave a gap between its full-sized sister at both bearing ends. Additionally, your old joists will have a smaller gap between them and your beam or bearing wall as a result of shrinking. To align the sister joists snugly with existing joists, hammer both ends.

In case the old joist does not fit very well beside the new one because of a tight fit, or if you are having trouble fitting the new joist in place, you can lift the joist at one end so it fits into place. If you need to jack up the old joists, make sure to do so gently so as to not damage the walls.

Then, place a piece of lumber directly below the old joist in the area where it rests and jack it up. By doing so, your sister’s joist should be able to fit over the old one.

In cases where a partial joist is being installed, the old joist will also need to be leveled. To achieve this, one way would be to bolt the sister joists.

Use a level to check that the sister joist fits snug properly, and then install a bolt at one end and the middle. Let the old joist rest on the sister joist, and install the bolt.

Nuts and bolts are preferable over screws for fastening. Nails have a much stronger shear holding power than screws, and joists are subjected to significant vertical shear forces.
16-d spiral nails can be used for sistering joists. It measures 3.5″ in length, which is sufficient to fasten together two 1.5″ thick joists-nail off the ends, and bend them back into the woods.

To nail a sister joist, alternate between top, middle, and bottom every 6″. In both cases, nails are zigzagged between the sister joists.

Fasteners will remain locked into place by the attachment, as well as the joist connections will be improved.

The next step is to reinstall your utilities after fastening and installing. In addition, verify that your newly positioned sister joists do not creak when you walk on the floor. Before you reinstall your wiring and plumbing, you should fix any issues that may have arisen.

Avoid these mistakes when trying to sister a floor joist

It is important not to rush the decision to sister a floor joist. In this case, it is vital to do this job correctly to repair a defective or damaged floor beam, and there are several common mistakes to watch out for. You may get dirty, but take comfort in the fact that fixing this problem correctly will prevent significant problems down the road.

Mistake 1: Not treating the initial problem

Two common reasons for the loss of strength in connecting floor beams are water damage, which results in rot, or termite damage in which the beams have disintegrated. These issues must be addressed before any restoration can proceed. Whenever you notice water damage, check for any leaks in the piping or condensation. In addition to water damage, mold is often associated with moisture.

A professional exterminator can help you take proper care of the house if termites have damaged it. Fixing the damaged beams to the damaged floor is only a band-aid that will not work and the damage will occur again.

Mistake 2: Notching or not lifting enough

In general, you can use 2x8s or new I-beams for newer floor beams. For older houses, however, you should use 2x6s. Replacement of the rotten material with 2x8s is a good idea, but a fit may be required between the subfloor and the ledge plate. Using two quick cuts to cut the notches and remove debris is simple, but the damage to the new wood is more severe.

It is recommended to carve a sister board with a similar dimension to replace a damaged floor joist. Nevertheless, this still leaves a slope on the floor due to the damage to the old joists. You may have to spend more time lifting damaged wood so that you don’t have to carve the new wood.

Mistake 3: Not using the level

A sister beam is generally not covered with the new wood around it. Consequently, the end of the new wood is not supported. It is essential to set this level to prevent the floor from falling and the sleepers from chipping.

Floor beams handle an incredible amount of weight. It is easy to nail a few nails on each board and move on after assembling these pieces. The problem arises when displacement or settlement causes the plates to separate. Nails are ideal for temporarily holding parts together, followed by lag screws or transport screws for locking them together permanently.

In most cases, combining the new wood and the existing joist with a few centimeters of overlap is pretty straightforward. By doing so, you save wood, but the pieces aren’t protected. Ideally, you should overlap two to three boards.

What causes the floor to sag?

Most residential homes use wood or engineered wood for their floor joists. This load capacity may sometimes be doubled or tripled based on the building code and the placement of the joists. Then why do they sometimes fail?

There is probably a connection between water and your foundation, as water seeps into the earth around it. Infiltration and saturation of water cause deterioration of wood. This deterioration leads to floor system failure.

Another common offender is termite-infested homes. In addition, there are a few species of beetles that consume wood. They are called powderpost beetles and are fairly common. When the larvae hatch, they consume the wood inside the beams. Both termites and beetles destroy your wooden flooring when they infest it.

Another possibility is human error, especially if you have retrofitted your home with updated plumbing, electrical, or HVAC systems. If someone has unknowingly notched or cut the principal beam, or even some joists to make way for new pipes or vents, such actions will ultimately break or crack the flooring.

Age of the Home

In older homes, substandard materials from different building code might be responsible for sagging. If some beams and joists are not big enough for the house and a contractor could install a shim to even out the floor installation. A shim adds a lift to make a leveled installation.

FAQs About How To Sister a Floor Joist

How much does it cost?

Sistering a floor joist costs can cost from $100 per joist, but there are many factors. For example, if ductwork or wiring needs to be moved out of the way, the project will cost more.

How many sisters should joists overlap?

There is no need for sister joists to overlap for more than 6 inches, with the minimum being 3 inches. An overlap that doesn’t match up with the load placement causes the ends to sag.

Use this article as a guide only. Consult an engineer or building professional for their solution on how to sister a floor joist. Because joists are a structural component of your house, a joist that needs repair could result in the floor wobbling, cracked frames, walls, and an unlevel living area. Fixing it with the right method prescribed by a building professional is essential to the safety in the home, as well as adhering to the building code.

How to Jack Up a Mobile Home

How to Pass a Radon Test

How To Fix Gap Between Door And Frame

0
For your convenience, this post has links to Amazon. When your door has a gap between the frame, you might notice that the door doesn't...
Read more
Home Improvement

0
For your convenience, this post has links to Amazon. Uneven flooring could happen in an old house. It could be a source of stress while...
Read more
Home Improvement

0
For your convenience, this post has links to Amazon. If it seems like your quartz countertops have lost their shine, or that they have sustained...
Read more

0
For your convenience, this post has links to Amazon. Structural damage such as sagging, moving, and shifting floors can create numerous problems if left unchecked....
Read more

How to Remove Green Mold from Wood Deck – 5 Simple Tips

0
For your convenience, this post has links to Amazon. Green mold can be a problem on outdoor surfaces because it can affect the resale value...
Read more

0
For your convenience, this post has links to Amazon. Bumper stickers on vehicles are a way of showing support for ideas and can also be...
Read more

0
For your convenience, this post has links to Amazon. The thought of walking with crutches is easy until you try it. Some of the common...
Read more

How To Clean a Harmonica

0
For your convenience, this post has links to Amazon. No instrument can match the harmonica when it comes to versatility and the soulful sound that...
Read more