How To Remove Deadbolt Without Screws

Safety is the first thing that you can think of at any time and about anything.

And that thought has pushed us to install various types of locks on the doors anywhere that we want to protect.

Deadbolts are one of those locks that provide us safety along with decorating the doors while hiding the screws from you.

But how to remove deadbolt without screws can be a question when you want to replace your deadbolt locks.

This question can lead you to have tension as the screws are not visible, and you start to think that there are no screws installed in the deadbolt. 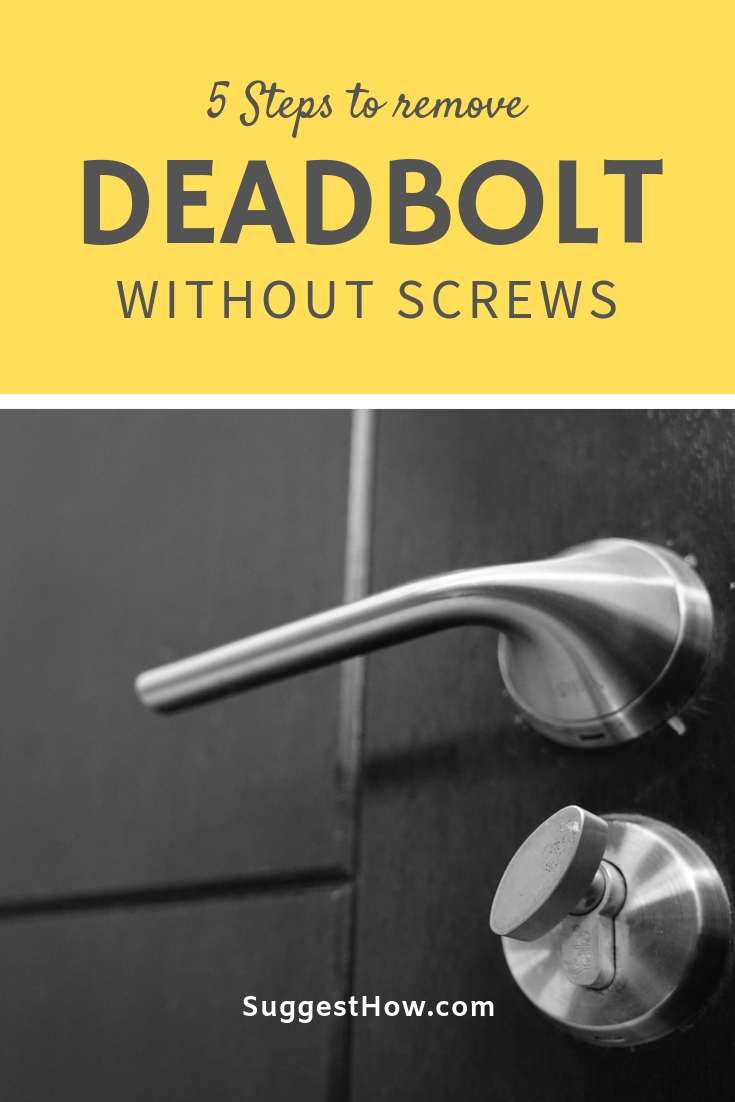 The reality of the deadbolt locks is that the locks come along with a base plate that covers the screws from the regular view.

The base plate also increases the decorative value of your door and makes our house safe at the same time.

But there are screws placed in the deadbolt locks. You can easily remove the deadbolt without screws only by removing the base plate on the lock.

For that, you need to follow a simple step by step process that you can find out in the below section of this article.

How To Remove Deadbolt Without Screws – Simple Step By Step Process

To remove the deadbolt from the door installed, you will be needing a flat head screwdriver, a Philips head screwdriver and an awl that has a sharp edge or point, or you can also use a paperclip to do your work.

After you arranged all the tools that you are going to use for the removal of the deadbolt lock, now jump to the steps to remove it in real.

Step 1: Face the Deadbolt from the Inside Part of Your House

To remove the deadbolt from the door of your house, first, stand in front of the lock from the inside of your home.

You will find out a thumb turner in the inside of your house and a key lock on the outside of the door.

You need to stand in front of the inside part to remove the deadbolt lock from your door.

Find out the small hole in the shaft of the thumb turner. The thumb turner basically attaches to the inside chassis with the help of the cylinder of the lock.

Now, use your awl or the paperclip to press the pinhole of the lock to release the lever of the thumb turner. After you have made the gear released, set it aside.

Step 3: Remove the Base Plate

Now get yourself the flathead screwdriver and find the small notch on the baseplate from the outside of the door.

After you have made the screws visible, it is now the turn to remove those screws away from the lock.

Use your Philips screwdriver to open up the screws from the door lock. There will be two screws revealed.

So, gently remove both of them. Now grab the lock from the inside and the outside of the door with your two-hand, pull them apart to remove them.

After removing them, set them aside in one corner.

Step 5: Remove the Screws of the Latch

After removing the chassis from the door, now open your door and find out the two screws that hold up the latch mechanism in the place.

Gently remove both the screws from the door and slide out the latch machine out of the hole or the part of the door.

You can use a Philips screwdriver to do your job.

Now set the pieces together to make the re-installation of your deadbolt lock easier, or you can install the new ones to your door.

The deadbolt locks give us the safety that we want.

The bolts are strong enough to take the pressure, and as the removal requires to have access to both the sides of the door, people can not sneak into your house.

This way, you can keep your home safe from goons and stealers.

To learn more about the deadbolt locks, find out the below section, and make your lives safe and easy.

What is the Best Way to Remove a Deadbolt?

The best way to remove a deadbolt is to follow the removal steps perfectly.

This way, you will be able to remove the deadbolt easily and without damaging anything of the lock or your door.

How Do You Unjam a Deadbolt Lock?

You can unjam the deadbolt lock by removing and re-installing it. But it can be solved a lot easier.

All you need to do is to lubricate the lock from both the side. You can also use a hammer to tap on the lock to unjam it slightly.

Or you can use a screwdriver to open the base plate of the lock to unjam it. All the ways work as smooth to unjam your home safety.

How Do You Get a Key Unstuck From a Deadbolt?

Sometimes we end up having a stuck key in the deadbolt lock of the door.

To solve the problem, you can jiggle the key to up and down motion, and the key will be unstuck. This way, you will be able to open up the lock of your door.

As deadbolt locks give us protection from the people outside, so, it is better to know about the hacks to make sure that we can handle all the problems by ourselves without any need to call anyone else to help.

0
If you are tired of getting high electricity bills every month, you have come to the right place. I used to go all crazy...
Read more
Cleaning

0
Your couch is probably that one place you sit most during your whole day. Who doesn’t love to enjoy a movie with some popcorn and...
Read more
Cleaning

How to Disinfect Baby Toys Properly – 7 Methods to Try

0
If you have a kid, you probably already know how important it is to clean and disinfect baby toys. The reason is your baby always...
Read more

0
Baking soda has always been one of the most effective ingredients for cleaning purposes. Rather than purchasing those expensive cleaning products, I prefer to...
Read more

9 Easy Ways to Keep Your House Clean All the Time

0
You are not alone if you are stressing over keeping your house clean all the time. It is quite hard for every one of...
Read more

50 Brilliant House Cleaning Tips That You Must Know

0
If you are tired of your messy and dirty house, it is time for a change. It is not always possible to clean a...
Read more

0
I love to work with mason jars as it serves two purposes. One is giving me a chance to organize my stuff in there,...
Read more

22 Clever Ways To Organize The Freezer

0
A freezer can be your best friend in need. I realized this just recently because of being home quarantined for days and can’t visit...
Read more